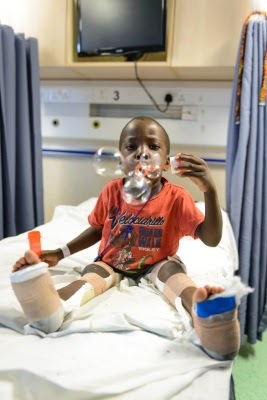 “What happened to me, Mummy?” Pierre would ask, “When are you going to fix my legs?”

Unsure how to answer her four-year-old son, Edwige made a promise that she would do everything she could to find healing for Pierre’s twisted legs. But a lack of vital nutrition from an early age meant Pierre’s bones wouldn’t support his growing body weight for long.

When Edwige realised nothing she did to help him was working, she feared for Pierre’s future. When she enquired about surgery at a local hospital, she was mocked and told that coins were not accepted. “I was angry because they were right,” said Edwige sadly. “I couldn’t afford it.”

When Edwige heard about Mercy Ships, she quickly began the journey to the Africa Mercy with her vivacious little boy, where she finally received what she’d hoped and prayed for throughout Pierre’s childhood — an appointment for surgery.

“For his age, Pierre was one of the worst cases I have seen,” said Mercy Ships volunteer physiotherapist Stefanie Neeb, who worked with Pierre during his rehabilitation. “He already had a dislocated knee cap, so he needed additional surgery. If we had not intervened, it wouldn’t have been long before he would be unable to walk completely.”

After a successful surgery to straighten Pierre’s legs, Edwige could breathe easy for the first time in a long time as she watched her son make his first steps toward a changed future. She had suffered the heartache of a seemingly unsolvable problem in her son’s life, but now she had found the hope her heart was lacking.

“Even with the best schooling, education, and qualifications, he would not have gotten far in life,” Edwige said. “The disabled are not favoured. But now, his future is secured as a man and member of society.”

On the day of Pierre’s discharge, Edwige watched video footage of her son walking before surgery. As the tears streamed down her face, Pierre joyfully ran and played behind her on his new legs — unaware of the emotional journey his mother had experienced.

“I now have a sense of comfort in my heart, and whenever I feel like I have a big problem, I just look at Pierre walking and it brings me peace,” Edwige said. “It heals my hurt.”