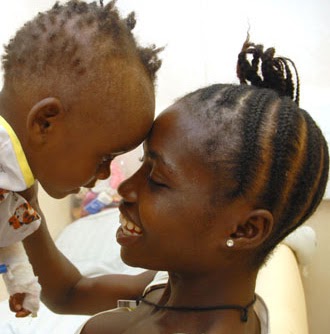 Fatmata sat quietly in the Admissions tent cuddling her sixteen-month-old daughter in her lap. She had been searching for over a year for someone to give her some hope that little Sidiatu might have a normal life. Born with congenital cataracts in both eyes, the baby’s blindness required her mother’s undivided attention.  Fatmata’s nine-year-old daughter watched the baby when her mother had to go to the market to sell her home-made soup.  Like so many other families in Sierra Leone, Fatmata’s husband is currently out of work.

Fatmata had taken Sidiatu to a local hospital for cataract surgery, but it was not successful.  A second hospital couldn’t help, either.  Finally, she found a local doctor who referred her to an eye screening with Mercy Ships.  After the ophthalmologist examined Sidiatu’s eyes, Fatmata received the precious appointment card for her daughter to have cataract surgery on the Africa Mercy.

Sidiatu had the surgery to remove the cataracts on both eyes.  Very active and curious, the little girl kept trying to remove the protective bandage.  The nurses wrapped her hands to ensure that the protection remained in place.

Early the next morning, the doctor removed the bandages.  Those in the ward held their breath as the little girl surveyed the world around her – for the very first time.  Anxious to grasp a balloon, she suddenly stopped.  Sitting perfectly still, she stared straight ahead in an effort to take it all in.  Then, quickly, she closed her eyes. The doctor said that this was a normal reaction.  The child’s senses were overwhelmed, and she was returning to a place of comfort – the familiar darkness.

Soon, Sidiatu opened her eyes again.  A toothbrush was set before her, and then a toy that was just out of reach. She stretched out her hand to grasp the red and blue truck.  A low gasp was audible in the ward.  It was obvious – she could see!  Tears welled up in the eyes of those who were privileged to witness this miraculous moment.  The doctor grinned.  A single tear ran down Fatmata’s left cheek.

About an hour later, Sidiatu was dressed and ready to go home to a life that was now in glorious color.  Sidiatu’s young life was forever changed.  Her loving mother’s hope had been fulfilled.