Empowered to Uplift Others: Partnering with Nurses in Senegal For Issa Deme, a paediatric nurse working in Dakar, Senegal, learning is a never-ending process.

“Nursing — and the overall medical field — evolves, so you have to follow it,” he said. “You cannot stick with one technique or old habits.”

So Issa didn’t hesitate when he heard about a new training opportunity in 2022.

He first boarded the newly built Global Mercy® hospital ship when she docked in Dakar for her first field service as a floating training centre. Issa was one of 30 Senegalese participants in a weeklong Nursing Skills course. The Medical Simulation Skills Institute (MSSI), a Ghanaian non-profit, partnered with Mercy Ships to host the training.

“Some things I learned before, but I had forgotten because we seldom use them,” said Issa.

The course was both a refresher and a chance for working professionals to update their knowledge, based on advancements in the field since they first went to school.

“How you used to treat or how you used to deal with patients, it is always progressing,” Issa said. “This training really helped in learning new things.” 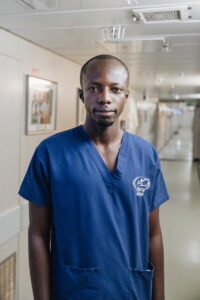 A Passion for the Next Generation

Issa is 29 years old, and he currently works at Albert Royer National Children’s Hospital in Dakar. His love for this job doesn’t just come from the work itself. It stems from the patients he serves.

Issa knew that learning new skills and refreshing old ones would benefit his patients. But he also believed it would help the next generation of healthcare professionals.

“Sometimes in the hospital where I’m working, I mentor students from private schools who shadow nurses,” he said. “I’m the one helping them, giving them some extra classes just to make them understand, to make them also ready to serve once they are nurses.”

Henrietta Ntow, from MSSI in Ghana, is an emergency nurse practitioner and the lead facilitator for the Nursing Skills course. She said the training is designed with the participants’ day-to-day work in mind.

“We want them to be able to put what they’ve learned into practice, and they should be able to teach others in their hospital,” she said.

Indeed, when Issa returned to his hospital after the training, he was energised and ready to share this new knowledge with his colleagues.

“We’re really making an effort to apply in our hospital what we learned,” he said.

And Issa wasn’t finished. He soon returned to the port of Dakar for a two-week mentorship program on the Africa Mercy®, serving three to four Senegalese patients each day.

“We easily came and fit in the group,” he said. “Even if we’re from another hospital, we don’t feel excluded. We feel included, and it’s really something that moved me.”

The ship environment, slower-paced and more specialised than a busy city hospital, allowed Issa the time and space to learn.

“It is well-organised, we have fewer patients, and we have all the materials we need,” he said. “I really found patients comfortable here. … When a patient feels comfortable, it really helps treatment.”

‘This Really Inspires Me’

Before his time with Mercy Ships, Issa knew how to care for his patients. He had the passion and the skillset he needed. But this experience empowered him to broaden his vision.

Issa is now thinking bigger and considering his role in strengthening the entire healthcare system in Senegal.

Just weeks before Issa trained on the Global Mercy, African heads of state gathered on board to sign the Dakar Declaration on accelerated access to surgical, obstetric, and anaesthetic care. Partnerships with working nurses like Issa are a step toward fulfilling those goals.